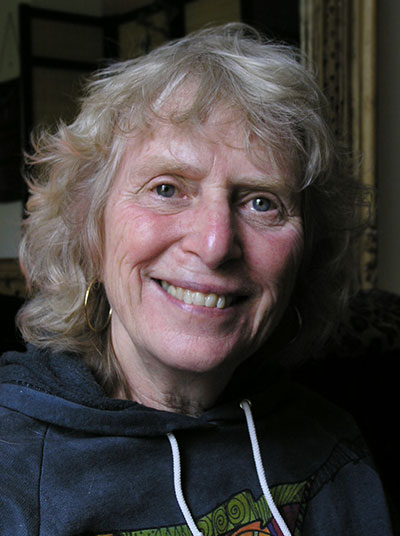 Bobbi Ausubel, MFA, was a leader in the Second Wave of the Women’s Movement in the 1960s-70s and thus brings with her the unique perspective of someone who was active in – not just witnessing – the evolution of the U.S. women’s movement over the last few decades. She is a contributor to the book That Takes Ovaries, co-playwright of the play of the same name, Artistic Director of the That Takes Ovaries organization and an international Leading a Bold Life trainer who leads women’s and all-gender empowerment events and workshops, including with prostituted, sex trafficked women and girls in red light districts. She has led these events and workshops across the U.S. and in developing areas in Asia, Africa and South America.

In India, she worked primarily with the N.G.O. Apne Aap Women Worldwide in rural and urban anti-sex trafficking centers. She has delivered Training of Trainers programs in India and Nepal and Guyana. Writing with Rivka Solomon, she produced a manual, Leading a Bold Life: A Training Manual for Female Empowerment Through Open Mike Sessions and Drama Activities. The manual includes training prostituted women and those women and girls at risk to speak up for themselves and speak out for their communities.

Bobbi is a theater director and drama consultant, including in public schools. She was co-Artistic Director of Caravan Theater, where she directed both contemporary and experimental plays for thirteen years. She co-wrote and directed the first play inspired by the modern feminist movement in the U.S. in the 1960-70s, titled How to Make a Woman. Bobbi was on the faculty teaching Acting for twenty years at the Boston Conservatory. For part of that time she was Chair of the Theater Division. There she inaugurated a body centered acting program which is still in place today. She also received a Radcliffe Institute two year fellowship to write a new play.

Bobbi Ausubel is a Registered Drama Therapist, trained at Omega Theater in Boston. She uses drama therapy in her work across the U.S. and globe. Bobbi is featured in the books Feminists Who Changed America, Women in American Theater and Fearless Femininity.

Recently, Bobbi was a directing consultant with the San Francisco feminist company Crackpot Crones, which performed at the NYC Fringe Festival. She also directed with Lillith Theater the first work-in-progress of Hick, the play about the love affair between Eleanor Roosevelt and journalist Lenora Hickok. Currently, Bobbi works with a senior community, where she teaches Acting Our Lives: Performance Memoir, and is directing a new work she wrote, Autobiography of My Father. She has two inspiring daughters, 3 grandchildren, a beloved partner Cecelia and enjoys gardening.